Imagine you are 10 years old and a classmate tells you he doesn’t like your shoes – how would you feel and respond? Some children might just shrug and continue with what they were doing, but others might feel rejected and act out aggressively towards their classmate. Now let’s imagine you see someone else get excluded in a ball game on the playground – would you stand up for that person or just keep playing? These are both examples of situations in which children regulate or adapt their behaviors based on the social context. However, there are many differences between children in how they respond when receiving feedback for themselves and for others, or in other words: in their social responsivity. In my PhD project, I aim to understand how these individual differences in social responsivity develop across childhood and whether these differences are related to wellbeing later in adolescence.

Aggression and prosocial behavior: two sides of the same coin?

When receiving positive social feedback about yourself from another person, it might make you act more kindly towards that person. On the other hand, receiving negative feedback about yourself can result in self-protective behaviors such as aggression. In the longitudinal L-CID study, we investigate aggression following social feedback using the Social Network Aggression Task. In this task, participants receive peer feedback on a personal profile and can send a loud noise blast towards the peer who gave the feedback. What we consistently find in both adults and children, is that negative feedback leads to more aggression (i.e., longer noise blasts) than neutral or positive feedback.

Besides standing up for yourself (for example by showing aggression), it is also possible to stand up for someone else by showing prosocial behavior, such as helping or sharing. In our studies, we measure this using the Prosocial Cyberball Game. In this task, participants play a ball tossing game with three other virtual players, where first each participant receives the ball an equal amount of times from the other players. However, in a second block, one virtual player is being excluded by the other two virtual players. Prior work found that children compensate for this exclusion by tossing the ball to the excluded player more often (i.e., they show prosocial behavior).

Aggression and prosocial behavior as measures of social responsivity

Even though aggression (‘antisocial’) and prosocial behaviors are often described as two opposite constructs on the same continuum, both behaviors can also co-occur. For example, popular kids may use both aggressive and prosocial strategies to gain social status, and whether to act aggressively or prosocial can depend on the context you are in. Also, the medial prefrontal cortex, a brain region that is often related to social processes, has been found to play a role in both rejection of self and others. Thus, aggression and prosocial behavior may be more related than we previously thought.

Therefore, we previously proposed a model in which we defined subgroups based on whether children show aggression and/or prosocial behavior (see the figure below). Specifically, children who show both aggression and prosocial behavior might be ‘strong responders to the social environment’, whereas children who show neither behaviors may be ‘passive bystanders’. We found that the ‘passive bystanders’ slightly increased in problem behavior one year later, whereas the ‘strong responders’ did not. This finding helped me realize that 1) behaving aggressively might not necessarily always be a ‘bad’ thing, especially in combination with prosocial behavior, and 2) studying aggression and prosociality together, instead of separately, can help us understand social development even better. 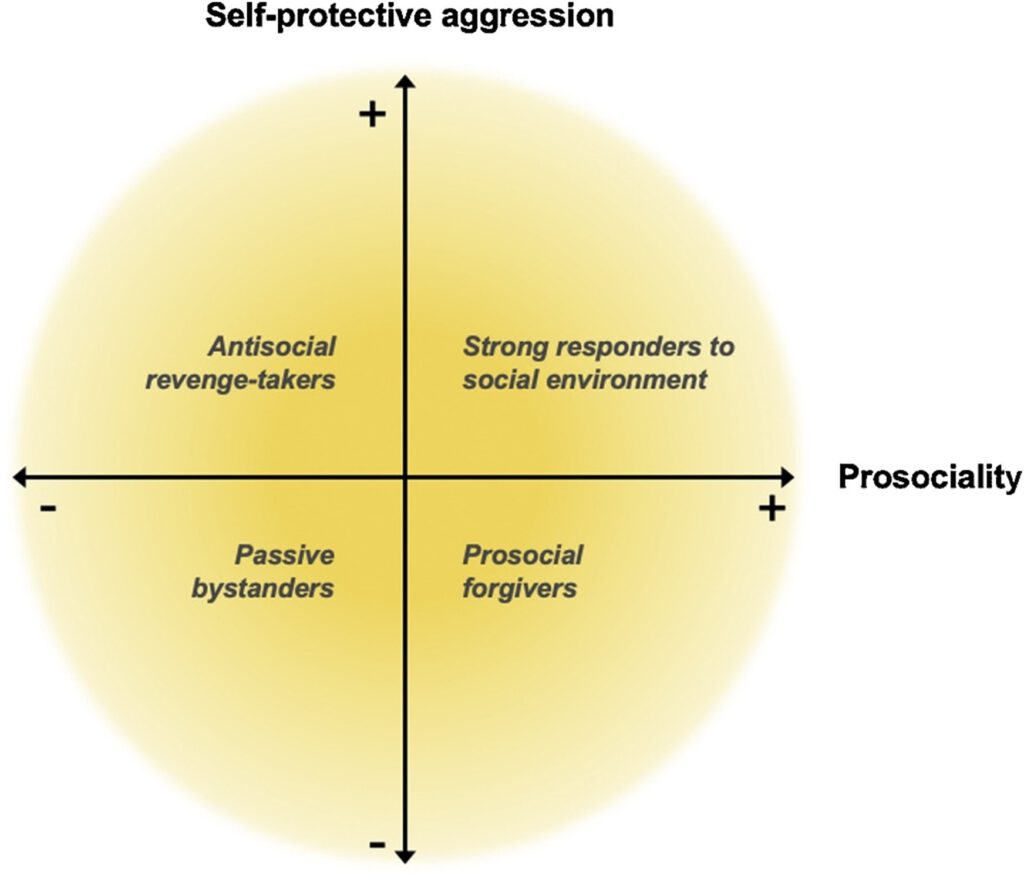 Is social responsivity beneficial for your wellbeing?

As we’ve learned by now, there are many differences in how children respond to rejection of themselves and to rejection of others. These individual differences might help us understand why some children show more behavioral problems later on in their development than others. One important question that I aim to answer in my next study is whether being responsive towards your environment (i.e., when standing up for yourself and others) in childhood might also have beneficial effects on your wellbeing and social relations later in development. Possibly, always acting prosocially towards others but never standing up for yourself (for example in a discussion) can result in others crossing your boundaries, which may not necessarily have a positive impact on your wellbeing. On the other hand, always immediately responding with aggression towards negative feedback, without sometimes also helping others (for example by giving a compliment) may also not be the best strategy to make friends. Perhaps, adjusting your response based on the social situation, so for example by sometimes standing up for yourself while also standing up for others, might have the most beneficial effects on how satisfied you are in your social life. I am currently analyzing the data for this project, so stay tuned for the results!

Social responsivity in the classroom: the teacher perspective

So far, the studies I’m conducting on social responsivity are based on data from controlled experiments in the lab. In experiments, we can optimally control the setting to specifically measure one construct, so for example aggressive responses to negative compared to positive peer feedback. This can lead to important insights into the social development of children. However, in the ‘real world’, such as in the classroom or at the playground, there may be many additional factors that can influence behavior that are more difficult to capture within the experimental set-up. Therefore, we believe that including the perspective of teachers can help us even better understand how we can promote social wellbeing. This is why we set up the Teacher Project, in which we try to integrate both researchers’ and teachers’ perspectives on social development and wellbeing.

Our aim is to work in co-creation with teachers throughout every step of the research cycle. For example, we recently finished the co-exploration step, during which we invited teachers to think along about which factors may contribute to social wellbeing. Right now, we are in the middle of the co-experimentation step, during which we ask teachers to rank those behaviors based on how much they believe they contribute to social wellbeing. In the next year, we hope to co-interpret, co-implement and co-evaluate the results together. Ultimately, with the Teacher Project, we aim to bridge the gap between scientific and educational practice, by working together on the question of which behaviors may contribute to social wellbeing. Luckily, I already heard some teachers say aggression regulation and prosociality are one of them!